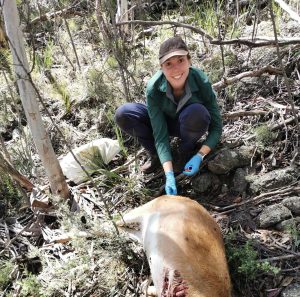 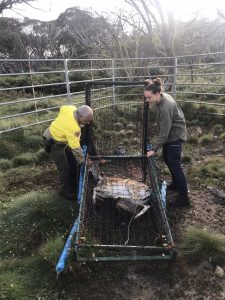 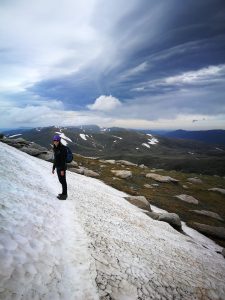 Eliane McCarthy, a PhD student from The University of Sydney, is investigating what happens to the carcasses of shot wild deer following a culling program and if culling attracts more predator species that scavenge such as feral cats and red foxes into the area . Her study is titled “Carcass provisioning in alpine Australia: what will this mean for native and introduced species?”.

Kosciuszko National Park’s alpine and sub-alpine region is the largest in Australia (Sanecki et al. 2006), extending altitudinally from approximately 1400 m to Australia’s highest peak, Mount Kosciuszko, at 2228 m (Green and Osborne 2012). The region consists of a mosaic of vegetation types, including wet and dry heath, tussock grassland and woodland (Green and Osborne 2012), and inhabits a multitude of threatened species and ecological communities, among them, the critically endangered mountain pygmy-possum (Burramys parvus) and southern corroboree frog (Pseudophryne corroboree; IUCN 2022).

The National Parks and Wildlife Service (NPWS) run Cross Tenure Feral Deer Management Project (hereafter the ‘NPWS deer project’) began in March 2019 and for two years, the project team has been collecting baseline data on deer species abundance and assemblages throughout the study site using two remote camera arrays (Fig. 1). Now, through several aerial control operations occurring over the course of the next four years, the team aims to reduce deer abundance in the study site by 70%. The team’s first cull in the alpine remote region of the NPWS deer project study site (hereafter referred to as the ‘big boggy’; Fig. 1) took place over two weeks in May 2022. During this period, the team culled approximately 400 deer, a follow-up cull in the same area in February 2023 will aim to cull similar numbers. What is unknown however, is what happens to these carcasses following culling? Will the carcass provisioning from culling attract more predator species that scavenge, including red foxes and feral cats? In addition, are there any other ecological effects of culling deer such as shifts in the occurrence or activity of co-occurring herbivores including other introduced species?

Further background and novelty: Following culling, the deer carcasses remain where they were shot until they fully decompose, as is the case with most control operations (NPWS, personal communications, 21 March 2022). Introduced predators and dingoes will likely scavenge on carcasses throughout their decomposition (Forsyth et al. 2014). During decomposition, introduced scavengers do aid in recycling nutrients from carcasses, however this in turn supports their populations and potentially exacerbates their impacts (Newsome et al. 2021). When carcasses are present in unnaturally high quantities in a desert environment, they have previously been shown to attract introduced carnivores, which scavenge on carcasses and prey on native species (Spencer et al.2021).

Similarly, provisioning carcasses in Europe has been shown to increase predator activity, which aggregate near carcasses, which in turn leads to decreasing herbivore activity (Cortés-Avizanda et al. 2009). Importantly, carcass availability during winter, when alternative prey is limited, can stabilize and increase predator populations (Crabtree and Sheldon 1999; Needham et al. 2014). Few studies to date have evaluated the effects of human-mediated carcass provisioning in an alpine environment across summer and winter, and none have done so in the study area. Therefore, monitoring of the big boggy area before, during and after periods of intensive culling is important for detecting changes in predator and herbivore abundance and activity in this highly threatened landscape.

What do we know so far? From camera array data from the big boggy collected since March 2020, we can see that native small mammal, macropod, ungulate (horses, fallow, red and sambar deer), leporid (rabbit and hare) and bird occurrences tend to decrease between summer and winter monitoring periods (Fig 2). However, native and introduced carnivore occurrences increase (for foxes and wild dogs/dingoes) or remain relatively stable (for cats) between the summer and winter monitoring periods (Fig 2). Therefore, I am interested in examining how carcass provisioning in the big boggy will affect predator and herbivore species occurrences and persistence in the big boggy for the control occurring just before winter, compared with control occurring in the summer.

My project aims are twofold: (1) To examine the effect of carcass provisioning on changes in species occurrences and activity for periods before compared with during/after extensive control. (2) To directly monitor fallow and sambar deer carcasses culled during the two control periods, to examine scavenger activity and feeding  references, and how these are affected by season. Importantly, direct monitoring of carcasses culled during aerial control, in addition to the camera array data, will allow us to assess if and how they are functioning as a supplemental food source for predator species that scavenge. Combining the two data sources will allow us to examine how carcasses are utilized by the carnivore guild, and how this in turn effects  predator and herbivore species throughout the big boggy.

I predict that: (1) carcasses from both control periods will be scavenged on by wild dogs/dingoes, foxes, cats, and birds, and scavenger species will exhibit spatial and temporal avoidance of competing species; (2) There will be increased fox, cat, and wild dog/dingo activity in the big boggy for the periods during and immediately after control periods, compared with the periods immediately before controls (camera array data from previous years will provide baseline activity levels for these species during this period); (3) For the herbivore species not  subject to control; there will be decreased native and introduced herbivore activity for periods during and immediately after controls, but then a long-term increase, due to decreased competition from deer; (4) winter carcasses will persist longer than summer carcasses and sambar carcasses will persist longer than fallow carcasses, prolonging the effects of carcass provisioning.

This May, I received locations of carcasses shot within the big boggy camera array nightly and hiked to the carcass locations the day after shooting to deploy a remote camera and record site and carcass information (e.g., canopy closure, animal demography and approx. weight) for a total of 21 deer (13 fallow and 8 sambar). If I can secure funding, I will repeat this process for a similar number of deer for the aerial control in February 2023. A month after each round of carcass camera deployment, I will collect and tag imagery from carcass and array cameras, recording information on species, number of individuals, species demography, activity at the carcass (feeding/passing by), time spent at the carcass and approximate weight carcass remaining for each day.

I will then conduct the following analyses: (1) A discrete-time Markov chain model will evaluate the factors likely to influence the presence/absence of each carnivore species on carcasses within each 24-hour period, including explanatory variables, (i) season, (ii) time since death, (iii) visits by other carnivore species the previous day, (iv) carcass species and (v) canopy type; (2) Generalized additive models will be used to assess trends in occurrences of native and introduced scavenger and herbivore observations at each camera in the existing array for periods before and after the commencement of aerial control; (3) Generalized linear models will be used to relate the presence/absence of predator species at each camera in the existing camera array to the presence/absence of each native and introduced herbivore species for the period following culling with (i) carcass density within 1 km2 (ii) approximate weight carcass remaining, (iii) season and (iv) canopy type; and (4) A generalized additive mixed model will be used to evaluate carcass breakdown over the sampling period, considering (i) time spent by each carnivore species at carcass (ii) carcass species, (iii) carcass size, (iv) season and (v) canopy type. Camera deployment for this study is approved under an NPWS research permit. 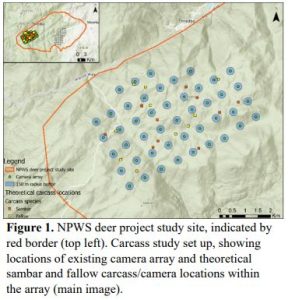 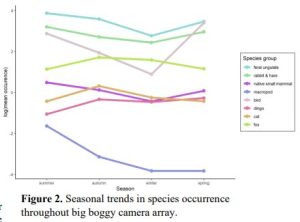 Are you studying at an Australian university and looking for funding opportunities for your research project? The Conservation and Wildlife Research Trust is offering a limited number of  research grants up to $5000 per year to help Australian END_OF_DOCUMENT_TOKEN_TO_BE_REPLACED

Are you studying at an Australian university and looking for funding opportunities for your research project? The Conservation and Wildlife Research Trust is offering a limited number of  research grants up to $5000 per year to help Australian END_OF_DOCUMENT_TOKEN_TO_BE_REPLACED

Are you studying at an Australian university and looking for funding opportunities for your research project? The Conservation and Wildlife Research Trust is offering a limited number of  research grants up to $5000 per year to help Australian END_OF_DOCUMENT_TOKEN_TO_BE_REPLACED