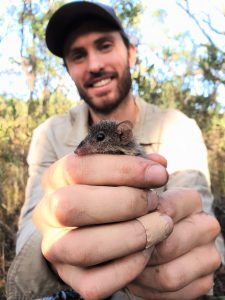 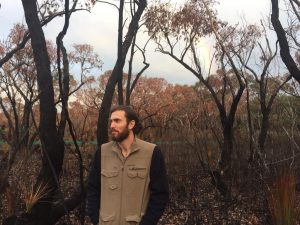 Darcy Watchorn, a PhD student from the Deakin University will be provided a grant to assist in his PhD project titled: Conserving threatened mammals in the face of fire and predation

Presently, there are few options for reducing the impacts of invasive predators post-fire. Poison baiting is commonly used for predator management, but baiting primarily targets foxes rather than feral cats, as cats prefer live prey and high bait-uptake typically occurs only when prey is scarce (Algar & Burrows 2004). Recently, baits targeting feral cats have been developed and used with some success (Doherty & Algar 2015). However, baits pose risks to many non-target native species, and higher bait-uptake by foxes can lead to the undesirable effect of releasing cats from top-down suppression (Marlow et al. 2015; Wang & Fisher 2013).

Another option for reducing the impacts of invasive predators post-fire is implementing low intensity, patchy burns in order to retain unburnt patches of habitat within larger burnt areas to provide ecological refuges for fauna (Robinson et al. 2013). However, such burns can be difficult to achieve in practice and results can be unpredictable. Furthermore, this method is largely restricted to planned burns rather than wildfires. Thus, innovative and integrated approaches to predator and fire management are sorely needed to enable the persistence of native fauna in post-fire environments (in the presence of cats and foxes) and prevent further extinctions.

One approach that capitalises on the natural phenomenon of ecological refuges is to install supplementary refuges post-fire. Supplementary refuges can provide prey species with protection and movement pathways between unburnt patches, reducing predation rates and improving population persistence post-fire. Arthur et al. (2005) found that providing mouse populations with felled trees covered in wire netting increased population densities compared to a control area. A predatorexclusion treatment confirmed the effect was due to reduced  predation. Other studies have demonstrated how cover can change prey behaviour and mediate the non-lethal impacts of predators.

The overall objective of my PhD is to assess the effectiveness of supplementary refuges (wire tunnels) for conserving threatened small mammals in post-fire environments. My study system is the Great Otway National Park in Victoria, where: (i) cats and foxes are present, (ii) appropriate control burns are scheduled, and (iii) numerous threatened mammal species occur. The three key project objectives I will
experimentally test are:

I am using a before-after (fire), control-treatment (refuges) experimental design replicated across three landscapes over three years in forest in the Great Otway National Park, using prescribed burns conducted by DELWP for the fire treatments. Landscapes two and three are scheduled to be burnt by DELWP in May 2020, whilst landscape one was burnt in May 2019. Each landscape will contain two control sites and two treatment sites (12 sites in total). Sites will be monitored pre- and post-fire to determine vegetation cover, predator activity and small mammal population size. The supplementary refuges are wire mesh tunnels (50 m length x 1 m width x 0.4 m high) with 50 mm openings that are predominantly covered (80%) with shade cloth. In this way, they both physically exclude invasive predators and act to obscure their prey search image. Five supplementary refuges will be installed at each treatment site immediately following the burn, spaced 30 m apart.

The CWRT grant will be used to support the second key objective of my study – ‘Does the provision of supplementary refuges reduce the vulnerability of small mammals (i.e. the perceived risk) to predation in post-fire environments?’

To measure the behavioural response of small mammals to the provision of the supplementary refuges, I will conduct a replicated giving-up-density (GUD) experiment in landscapes two and three (landscape one will be excluded from the experiment as it was burnt in May 2019). These experiments will allow me to investigate the trade-offs that individual small mammals make when balancing the benefits of gaining food against the risk of predation. To do this, I will install 10 food stations per site. In the treatment sites, I will install one food station in each of the supplementary refuges (N=5) and one food station between the refuges (i.e. 15 m from a refuge; N=5). The food stations at control sites will be arranged in a grid with 15 m spacing. Each food station will consist of 10 mealworms mixed in a sawdust matrix.

To accurately quantify: (1) the breadth of small mammal species utilising the food stations, (2) the perceived predation risk of small mammals in post-fire habitat, and (3) the temporal activity trends of small mammals at the food stations, I will deploy one infra-red camera-trap with video capacity (purchased with CWRT grant money if successful) at each food station. Cameras with remote video recording capabilities offer a cost-effective, nonintrusive opportunity to identify which individuals are visiting GUD patches and what they do there, and greatly enhance the quality of the data.

The GUD experiment will be conducted at both the control and treatment sites at 3, 6 and 12 months post-fire. In this way, I can determine whether small mammals perceive the supplementary refuges as safe foraging habitat. Understanding how small mammals perceive the supplementary refuges is a crucial step in determining their effectiveness as a management tool.

This study has been approved by the Deakin University Animal Ethics Committee (B26-2018) and is being conducted under permit by the Department of Environment, Land, Water, and Planning, State Government Victoria Permit No. 10008861. Research on live animals is following the ASM guidelines (Sikes and the Animal Care and Use Committee of the American Society of Mammalogists 2016).

Are you studying at an Australian university and looking for funding opportunities for your research project? The Conservation and Wildlife Research Trust is offering a limited number of  research grants up to $5000 per year to help Australian END_OF_DOCUMENT_TOKEN_TO_BE_REPLACED

Are you studying at an Australian university and looking for funding opportunities for your research project? The Conservation and Wildlife Research Trust is offering a limited number of  research grants up to $5000 per year to help Australian END_OF_DOCUMENT_TOKEN_TO_BE_REPLACED

Are you studying at an Australian university and looking for funding opportunities for your research project? The Conservation and Wildlife Research Trust is offering a limited number of  research grants up to $5000 per year to help Australian END_OF_DOCUMENT_TOKEN_TO_BE_REPLACED