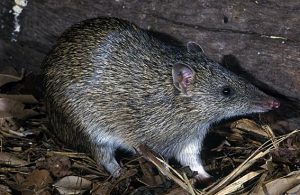 Megan Edwards, a PhD student at the University of Queensland has been provided a grant to assist in her PhD project involving the northern brown bandicoot and the greater bilby. The grant will be used to test if predator avoidance training benefits bandicoots once they are released back into the wild.

Introduced predators have been attributed to biodiversity loss worldwide, not only for predation on native species, but also because of competition and disease (Doherty et al., 2016). Over 700 species worldwide have been, or are, affected by introduced mammalian predators (Doherty et al. 2016). In Australia, these introduced predators have not only been the leading factor in the failure of introduction or reintroduction projects, but were also often the cause for the disappearance of Australian species from their native range, resulting in the need for these reintroduction projects. More than a quarter of Australia’s mammals have become extinct in the past 220 years, and Australia now has the world’s worst mammal extinction record (Short and Smith, 1994, Johnson, 2006). This is often attributed to prey naivety; as Australia’s wildlife did not evolve concurrently with eutherian predators, it is suggested they exhibit varying degrees of prey naivety (Banks and Dickman, 2007, Salo et al., 2007). As a result of this prey naivety, many native animals do not exhibit a response, or exhibit an inappropriate response, to introduced predators such as cats and foxes (Banks & Dickman 2007).

Predator avoidance training is a relatively unexplored concept in Australia, which attempts to create or correct a prey’s response to a predator (Moseby et al., 2015). There are various methods of predator avoidance training, including the use of olfactory and visual cues linked to a specific predator, usually paired with something unpleasant to encourage the native animals away from the perceived threat (Moseby et al. 2015).

The incorporation of technology in ecological and conservation projects is critical for their development (Marvin et al., 2016). Radio frequency identification (RFID) in the form of microchips has great potential for use with wildlife (Hoy et al., 2010). RFID microchip-automated technology can create exclusive feeding stations that only microchipped animals can access. This technology can also be combined with traditional nestbox programs, and can improve the efficiency of monitoring, and exclude non-target species. This could be expanded to develop artificial burrow systems for burrowing species. This concept will be combined with the predator avoidance training, to create safe refuges from the introduced predators, where only the microchipped animals have access.

As part of my PhD project being undertaken at The University of Queensland, the northern brown bandicoot, Isoodon macrourus, and the greater bilby, Macrotis lagotis, will be i) trained to use a microchip-automated burrow, to allow them to escape into an area that other animals cannot access unless they are microchipped and programmed to allow access to the burrow (i.e. exclude predators), ii) tested to see if they recognize cats and foxes as potential threats, iii) be trained to avoid these introduced predators, and iv) be released (bandicoots only) back to the wild, to test if the predator avoidance training improved the bandicoots’ reintroduction success. This grant application deals with the fourth of these aims; testing if the predator avoidance training benefits northern brown bandicoots once released back to the wild.

The predator avoidance training experiment will take place in enclosures at the Hidden Vale Wildlife Centre, located near Grandchester, Queensland. Wild-caught bandicoots will be divided into four treatment groups; control, model, live-animal, and odour; with four bandicoots per treatment. The bandicoots will firstly be taught to use a microchip-automated burrow, to allow them to escape from predators into safe refuge, then they will be tested for recognition of cats and foxes using one of the treatment groups. Once tested, the bandicoots will be trained to avoid the predators, using predator odour, live-animal or model predator, paired with an alarm call and an unpleasant experience.

Once tested and trained, bandicoots will be released into their natural habitat on properties in south-east Queensland. Bandicoots will be released in groups of four, with each group consisting of one control, one odour trained, one model trained and one live-animal trained animal. When released, the bandicoots will be transported in artificial burrows, just before sunset. The nestboxes will be placed in a suitable area on the ground before sunset, and the bandicoots will be allowed to naturally emerge when ready. The artificial burrow will be observed using a red-filtered spotlight for up to four hours to ensure the animals emerge. A camera trap will be facing the burrows and left in place for approximately one month to monitor use.

Released animals will be fitted with VHF tags. Animals will be tracked frequently to monitor their movement and survival (reintroduction success). VHF tags will be left on animals for up to 60 days, and at the end of the tracking period, traps will be set to capture the animals and remove their tags. The data gathered during tracking of bandicoots will be used to monitor their dispersal from the release site, their survival rate after release, and use of the artificial burrow. Comparisons between the control and trained animals, as well as between training methods will be used to see which, if any, of the training methods had an impact on bandicoot reintroduction success.

This research will be conducted under a Scientific Purposes Permit (WA0001464) and with animal ethics approval from The University of Queensland (SAF/126/17) and (ANRFA/SAFS/336/17).

Are you studying at an Australian university and looking for funding opportunities for your research project? The Conservation and Wildlife Research Trust is offering a limited number of  research grants up to $5000 per year to help Australian END_OF_DOCUMENT_TOKEN_TO_BE_REPLACED

Are you studying at an Australian university and looking for funding opportunities for your research project? The Conservation and Wildlife Research Trust is offering a limited number of  research grants up to $5000 per year to help Australian END_OF_DOCUMENT_TOKEN_TO_BE_REPLACED

Are you studying at an Australian university and looking for funding opportunities for your research project? The Conservation and Wildlife Research Trust is offering a limited number of  research grants up to $5000 per year to help Australian END_OF_DOCUMENT_TOKEN_TO_BE_REPLACED