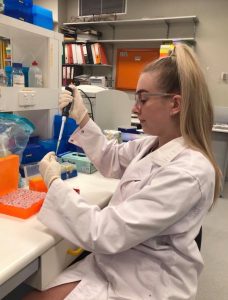 Kalynda Watson, a honours student at the University of Wollongong has been provided a grant to assist with her honours project looking into improving the control of the introduced European fox. The grant will be used to analyse fox DNA to better understand their population genomics with the result hopefully assisting in the smarter control of foxes.

The research proposed here, aims to understand the genomic diversity and movement patterns of foxes in a landscape where foxes are the primary cause of decline to the numerous threatened and native species found there. Genome wide diversity, population genetic structure, paternity, connectivity of populations (migration rates) and adaptive potential of fox populations across the Illawarra/Shoalhaven Regions will be analysed using genetic markers called single nucleotide polymorphisms. Understanding the population genomics of foxes will enable a better understanding of how they use the landscape to enhance their position as a key predator; which in turn will allow for the smarter control of foxes.

Foxes are the single most important threat to native species in Australia. It is well known that they directly kill and prey upon native species, spread disease and outcompete native animals for important food and shelter resources (Woinarski et al. 2015). The pattern of decline in native mammals and a push towards their extinction as a result of foxes is a pattern that has unfolded over a period of 100 years, coinciding with multiple deliberate releases of red fox in Australia (Fairfax 2019). In south eastern Australia, in the Illawarra and Shoalhaven Regions, foxes are known to climb trees to prey on sugar gliders and brush tailed possums, wombats, prey on turtle eggs, amphibians and a range of other native species (Mella et al. 2018; T. Bagnall, P. Jirgens pers. obs.). Recently, several NSW South Coast community groups (i.e. Berry Landcare, National Parks Association), have received funding (NSW Environmental Trust) to revegetate parts of the South Coast Region to re-connect remnant bushland patches on private property and national park estate, through a now agriculturally fragmented landscape. The threat of foxes to these efforts is at the forefront of the conservation efforts being made. In light of this important conservation work, in 2018/19 Shoalhaven Landcare coordinated their efforts to initiate the Berry to Budgong fox control program to control foxes via baiting and shooting, all with the overarching aim of native species conservation (see: Crawford, 2018).

However, control of foxes by baiting or shooting is only part of a successful long term control program for foxes. In addition to this there needs to be a detailed understanding of how genetically diverse foxes are across the landscape; how they move across the landscape and utilise key parts of their home range. This genetic information will allow us to understand mating patterns, movement patterns and therefore how foxes use the landscape itself. Once this information is known it will then provide an understanding of how genetically robust populations are and where they are geographically coming from (i.e. their geographic source, is it local or are foxes recruiting from outside of the study area?). This information can then be used to target specific geographic areas (i.e. source populations) for smarter fox control. In turn, smarter fox control will lead to improved outcomes for threatened and non-threatened native species alike since there are numerous studies that have shown an improvement in native species survival and recovery when fox numbers have been reduced in an area (Radford et al. 2018).

100 tissue samples from foxes shot during the 2019 Berry to Budgong fox control project will be genotyped for genetic variation (SNPs) in this project. Each fox represents a unique geographic location in the Illawarra and Shoalhaven Regions, spanning an area of 550 km2; hence the population genomics of foxes will be known from a large area and on a landscape scale. Such a landscape scale investigation of fox genetics has not been undertaken in Australia to date.

There are no specific scientific licences or animal ethics permits that are needed to undertake this work as all the fox samples are being donated to the project and the foxes are not being specifically sampled for this project. Rather they are being shot for the primary purpose of their control and if were not donated to the project, would otherwise be discarded. This information has been discussed with the University of Wollongong Animal Ethics Committee who affirmed that there was no need for animal ethics approval for this project.

Are you studying at an Australian university and looking for funding opportunities for your research project? The Conservation and Wildlife Research Trust is offering a limited number of  research grants up to $5000 per year to help Australian END_OF_DOCUMENT_TOKEN_TO_BE_REPLACED

Are you studying at an Australian university and looking for funding opportunities for your research project? The Conservation and Wildlife Research Trust is offering a limited number of  research grants up to $5000 per year to help Australian END_OF_DOCUMENT_TOKEN_TO_BE_REPLACED

Are you studying at an Australian university and looking for funding opportunities for your research project? The Conservation and Wildlife Research Trust is offering a limited number of  research grants up to $5000 per year to help Australian END_OF_DOCUMENT_TOKEN_TO_BE_REPLACED