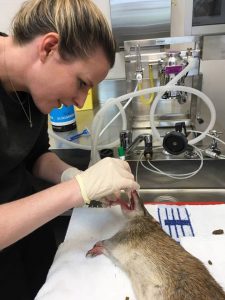 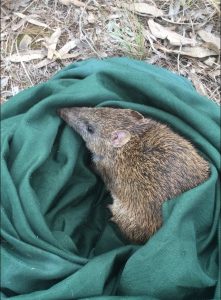 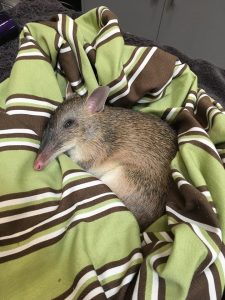 Charlotte Tinsley, a PhD student at the University of Queensland will be provided a grant to assist in her PhD project titled: The impact of anthropogenic land use on the prevalence of parasites and disease in free-living bandicoot populations

Anthropogenic land changes, such as clearing native forests for the expansion of urban and agricultural areas, result in substantial alterations to native ecosystem structures and processes (Bradley & Altizer 2007; Brearley et al. 2013; Soulsbury & White 2016). There is a growing body of research that supports the theory that prevalence of parasites and disease is higher in wildlife inhabiting heavily modified, anthropogenic landscapes (Allan et al. 2003; Lehrer et al. 2010; Hillman et al. 2017). Reduction in habitat size combined with behavioural modifications such as seeking anthropogenic food sources can lead to increased interaction between humans, domestic animals and wildlife species (Eymann et al. 2006; Hillman & Thompson 2016; Hillman et al. 2017). In these areas, transmission of pathogens from wildlife to humans and domestic animals is a potential human-wildlife conflict which requires further investigation. The aim of this research is to determine the impact of anthropogenic land use on the prevalence of parasites and disease in northern brown and long-nosed bandicoots in South East Queensland. This will be achieved by trapping northern brown and long-nosed bandicoots in urban, peri-urban and rural environments. Ectoparasites will be identified and diagnostics will be performed to screen for pathogens listed in Table 1. The anticipated outcomes of this project are 1) improvement of current knowledge regarding the epidemiology of several parasites and disease in SEQ; 2) provide insight into the proposed link between increased prevalence of disease in wildlife and anthropogenic land use. This research may lead to recognition of the importance of environmental health as a safeguard for human and domestic animal health by reducing the risk of pathogen transmission from wildlife.

Table 1: Organism to be tested, sample required and diagnostic test.

Trapping will begin in September 2018. The methodology for this study has been approved by the University of Queensland’s Native/Exotic Wildlife and Marine Animals, Animal Ethics Committee (NEWMA AEC) under the approval number SAFS/036/18, and by the Department of Environment and Science, Scientific Purposes Permit number WA0007547. Six trapping sites in South East Queensland have been selected. Two habitat fragments along the Bulimba Creek in Carindale and Wishart, Brisbane, that were previously trapped by Fitzgibbon et al. (2007). Two private peri-urban properties, one on the outskirts of Brisbane and one in the Lockyer Valley. Two cattle properties in the Lockyer Valley; Spicers Hidden Vale and Queensland Trust for Nature Property, Aroona. Trapping will occur at the six different locations in three-night blocks. This process will be repeated every three months at each location to allow for seasonal variation of disease and parasite loads (Table 2). Up to 40 traps per night will be set and baited with bread and peanut butter. Any northern brown or long-nosed bandicoots (up to 84 of each species) will be transported to the Hidden Vale Wildlife Centre. Any other species trapped will be recorded and released.

Bandicoots will be anaesthetised using isoflurane. Each bandicoot will be microchipped for future identification. Blood, urine and faecal samples will be taken as well as oropharyngeal swabs. A representative sample of ectoparasites will also be removed. I will perform the majority of diagnostic tests myself including urinalysis, faecal floatation, parasite identification, PCR and some serological tests. All bandicoots will be released at the same trapping site at dusk on the same day.

In addition to the trapping, any northern brown or long-nosed bandicoots found dead or that have been euthanised at veterinary clinics will be sourced. Necropsy of these animals will be carried out. Gross pathology will be described and further diagnostics such as histopathology and PCR will be carried out as necessary.

Are you studying at an Australian university and looking for funding opportunities for your research project? The Conservation and Wildlife Research Trust is offering a limited number of  research grants up to $5000 per year to help Australian END_OF_DOCUMENT_TOKEN_TO_BE_REPLACED

Are you studying at an Australian university and looking for funding opportunities for your research project? The Conservation and Wildlife Research Trust is offering a limited number of  research grants up to $5000 per year to help Australian END_OF_DOCUMENT_TOKEN_TO_BE_REPLACED

Are you studying at an Australian university and looking for funding opportunities for your research project? The Conservation and Wildlife Research Trust is offering a limited number of  research grants up to $5000 per year to help Australian END_OF_DOCUMENT_TOKEN_TO_BE_REPLACED