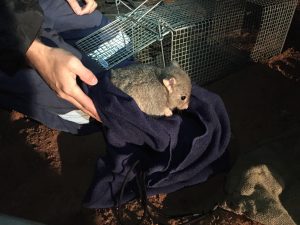 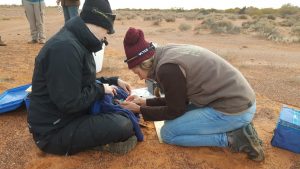 Philippa McKay, a student from The University of Edinburgh, working in collaboration with University of Melbourne’s Faculty of Veterinary and Agricultural Sciences, has been provided funding to investigate Toxoplasmosis in Burrowing Bettongs. She will be comparing the prevalence of toxoplasmosis in feral cat-exposed and feral cat-free populations of Burrowing Bettongs in South Australia’s Arid Recovery conservation area.

The reintroduction of locally extinct species to native habitats is an important method used to address dramatic population declines experienced by native Australian wildlife. For these programmes to be successful, a thorough understanding of the risks posed to reintroduced populations is essential. There is increasing interest in the impact of disease on native marsupial species, particularly by exotic pathogens, such as Toxoplasma gondii. This research project aims to both investigate the potential threat of this disease and explore ways to mitigate this by informing future reintroduction protocols.

This research is being undertaken as a dissertation project for a Masters in Conservation Medicine and will be a collaboration with the Faculty of Veterinary and Agricultural Sciences at the University of Melbourne and Arid Recovery in SA. Arid Recovery is a not-for-profit organisation and ecosystem restoration program that strives to re-establish vulnerable native species otherwise extinct or rare in the arid zone. Burrowing bettongs (Bettongia lesueur) are one of four locally extinct species that have been reintroduced to a protected 123km2 area. A subsection of this population has been exposed to feral cats as part of ongoing research into predator-prey relationships and the possibility of these species coexisting in the wild. This project aims to screen bettongs for the presence of T.gondii, a zoonotic protozoon transmitted by felids to virtually all warm-blooded animals (Robert-Gangneux and Darde 2012). In particular, it will test the hypothesis that seroprevalence will be higher in those bettongs exposed to, compared to those protected, from feral cats. The aim of this research is to determine if there is a disease risk associated with introducing cats to bettong populations, which will inform future reintroduction programmes undertaken by Arid Recovery and similar conservation groups.

There is evidence of T.gondii infection or exposure in numerous Australian marsupials, including the closely related brush-tailed bettong (Bettongia pencillata), although its impact remains unclear (Hillman et al, 2016). Outbreaks in captive marsupials have been characterized by relatively high morbidity and mortality rates (WHA, 2017), suggesting that toxoplasmosis may have more severe consequences in hosts that have not co-evolved with felids (Basso et al, 2007). Feral cats occur across over 99.8% of Australia (Legge et al, 2017), therefore there is significant potential for exposure to T.gondii. Evidence suggests an association between higher seroprevalence in marsupial populations exposed to higher densities of cats (Hollings et al, 2013; Parameswaran, 2008). Whilst successful efforts have been made to create predator-free reserves, it is recognised that cats may never be completely eradicated from the Australian landscape. Therefore, understanding the threats posed by introduced predators is essential if native species are to be successfully reintroduced.

Robust evidence regarding T.gondii seroprevalence, incidence and associated morbidity and mortality in free-ranging native marsupial populations is limited and requires further research (Hillman et al, 2016). This study provides a unique opportunity to compare toxoplasmosis in two populations of a wildlife species with known and controlled exposure levels to cats. Therefore, this data will make an important contribution to a growing body of literature.

This study will measure seroprevalence of T.gondii in two reintroduced populations of bettongs within the Reserve. A ‘cat-free’ population (600-800) is protected by a predator-proof fence, whilst a ‘cat-exposed’ population (200-300) has been exposed to a population of feral cats since 2008.

Bettongs will be trapped during annual monitoring by teams of experienced Arid Recovery staff. Baited cage traps will be set at dusk and checked at dawn over 8 nights. Individuals will be transferred into soft bags, weighed, sexed, ear-tagged, condition scored and examined for clinical signs of toxoplasmosis. Data will be recorded along with GPS location. Blood sampling will be performed by two experienced veterinarians. Bettongs will be restrained to enable venepuncture of the lateral coccygeal vein. Up to 0.5ml of blood will be collected into serum tubes. This is the method most widely used for conscious blood sample of bettongs (Vogelnest et al 2008; Portas, 2018) and has been successfully used by one of the participating vets. Animals will be released at point of capture.

Once clotted, samples will be centrifuged and serum transferred to microcentrifuge tubes for freezer storage (-20◦C) (Fancourt et al, 2014). Samples will be couriered to the University of Melbourne. A modified agglutination test (MAT) will be used to screen serum for immunoglobulins (IgG) specific to T. gondii. This is considered to be the most sensitive test for the detection of T.gondii-specific IgG in marsupials (Dubey et al, 2010). Excess serum will be stored for future research. To avoid missing individuals that have fatally contracted toxoplasmosis, bettong carcasses found in the 6-month period prior to trapping have been collected and frozen. Tongue, brain, lungs, heart and muscle samples from these will be tested for T.gondii DNA using rt-PCR (Paramaswaran et al, 2010). Results will be used to calculate the prevalence of T.gondii in both populations and statistically analysed to determine any significant difference between the two.

Field work and sample export is being carried out under a research permit held by Arid Recovery. Ethics approval for blood sampling has been obtained from SA Wildlife Ethics Committee (2/2019). Trapping is covered by ethics approval for ongoing monitoring by Arid Recovery (14/2017M2). Applications for permits to import and hold samples at the University have been submitted.

Are you studying at an Australian university and looking for funding opportunities for your research project? The Conservation and Wildlife Research Trust is offering a limited number of  research grants up to $5000 per year to help Australian END_OF_DOCUMENT_TOKEN_TO_BE_REPLACED

Are you studying at an Australian university and looking for funding opportunities for your research project? The Conservation and Wildlife Research Trust is offering a limited number of  research grants up to $5000 per year to help Australian END_OF_DOCUMENT_TOKEN_TO_BE_REPLACED

Are you studying at an Australian university and looking for funding opportunities for your research project? The Conservation and Wildlife Research Trust is offering a limited number of  research grants up to $5000 per year to help Australian END_OF_DOCUMENT_TOKEN_TO_BE_REPLACED