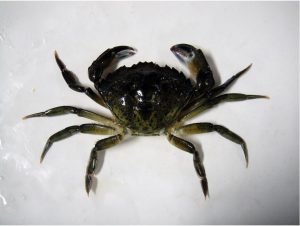 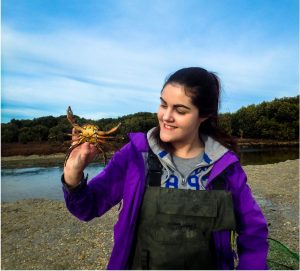 Rene Campbell, a PhD student from Flinders University, has been provided a grant to assist in her PhD project ‘Population biology of the invasive European shore crab (Carcinus spp.) in southern Australia’. The grant will be used undertake next-generation DNA sequencing to investigate variations in the genetic structure of the crabs within and between different populations, at both fine and large spatial scales.

Two species of European shore crab (or green crab) are currently recognised worldwide: the Atlantic Carcinus maenas and the Mediterranean C. aestuarii, both of which have established populations in countries outside of their native geographic range. They are opportunistic predators that can impact on native biodiversity and shellfish industries through predation and competition. Carcinus maenas in particular has been classified by the Invasive Species Specialist Group (ISSG) and IUCN as one of the “100 of the world’s worst invasive species” (http://www.iucngisd.org/gisd/species.php?sc=114).

European shore crab populations were first introduced to Australia via ship ballast water, with first records in both Victoria and New South Wales found in the 1890s, South Australia in 1976 and Tasmania in 1993. Population genetic structure for Carcinus has been assessed in most of their invasive range, with clear genetic separation occurring for different countries and regions. In Australia, populations from VIC and NSW are quite similar, while Tasmanian populations were derived from the mainland in a secondary introduction event. Despite the first record of Carcinus in South Australia occurring nearly 20 years before the Tasmanian records, no population genetic structure has been conducted for this population. From a global perspective, this raises questions about the timeline of transportation pathways that were responsible for primary or secondary invasion events of Carcinus, and how establishment success of a marine invasive species can be influenced by historical or recent introductions.

In South Australia, Carcinus are found throughout mangrove habitats of the Barker Inlet, industrial harbours of Port Adelaide, and rocky shores and estuaries along the southern metropolitan coastline (from Hallett Cove down to Aldinga). We currently hypothesise the crabs are part of one larger population, where factors such as larval dispersal from currents or shipping pathways allow for gene flow between regions in Gulf St. Vincent.

Population genetic structure can identify variation both within and between South Australian populations to help address population connectivity. Comparing the genetic structure of Carcinus from South Australia to other introduced populations in southern Australia (i.e. Tasmania, Victoria) and source populations from their native range may also help identify potential invasion pathways or colonisation events. This project can help inform or improve risk assessments for invasive species management and biosecurity, and provide additional understanding for global changes on coastal ecosystems.

Chapter 3 of this PhD project will investigate how the genetic structure of Carcinus maenas varies within and between different populations at fine spatial scales (South Australia) and larger scales (southern Australia and Europe). Source populations from Carcinus’ native range in Europe will be assessed to provide comparisons to the Atlantic and Mediterranean coastline. Comparisons with Carcinus populations in TAS, NSW and VIC will help us understand the connectivity of South Australian populations, and may also assist with identifying invasion events. In order to achieve this objective, a next-generation sequencing technique called DArT-Seq will be used. Developed by Diversity Arrays Technology in Canberra (https://www.diversityarrays.com), this technique can
identify thousands of markers in non-model organisms. This particular method of next-generation sequencing has not been conducted on Carcinus previously, and can provide accurate estimates to address fine-scale population structure from small sample sizes (e.g. 4-6 individuals per population).

One 96-well plate will be sequenced for this Chapter (~94 samples + 2 controls), with Carcinus samples obtained from both Australian and European populations. Crabs have been sampled in South Australia using a combination of baited opera-house traps and time searches, which has been successful in obtaining samples for other chapters of this project. Sub-populations in three habitat regions along Gulf St. Vincent will be assessed: mangrove, harbour and rocky shore, with approximately 10 individuals sampled per region (total n for SA = 30). Approximately 10 crabs will be obtained from interstate populations in southern Australia (Tasmania n = 10; Victoria n = 10; NSW n = 10), however this may be dependent on abundance of crabs. Finally, 20 individuals will be sampled from the native European range (Germany/Portugal/Atlantic n = 10; Italy/Mediterranean n = 10), and possibly 10 samples from another introduced range such as the United States for an additional comparison on invasion events. Interstate and overseas samples will be collected by other researchers who are familiar with Carcinus. These researchers have been contacted and a sampling/packaging guide will be sent out accordingly. A leg will be removed from the crab and preserved in 70% ethanol before transport to South Australia and packed
in 5-10 mL vials following Australian Biosecurity Import Conditions (BICON) and Special Provision A180 (https://www.casa.gov.au/standard-page/special-provision-a180). The carapace width of each crab, sex, colour, sampling date and location will also be recorded for each individual to help further explore population structure. Quality control of DNA, packing, labelling and postage/shipping will be conducted as per recommendations from DArT (https://www.diversityarrays.com/orderinstructions/dna-shipping-instructions-australia/), along with the preparation of samples files (https://www.diversityarrays.com/orderservices/samplefileformat/). Research for this PhD project is conducted under a Flinders University Animal Welfare Approval (Flinders application number E430/16), permits to have possession and/or control of a noxious species (PIRSA permit numbers MP0050, MP0072 and MP0102) and Ministerial exemptions for the collection of marine/freshwater organisms (PIRSA exemption numbers ME9902877, ME9902954 and ME9903005).

Are you studying at an Australian university and looking for funding opportunities for your research project? The Conservation and Wildlife Research Trust is offering a limited number of  research grants up to $5000 per year to help Australian END_OF_DOCUMENT_TOKEN_TO_BE_REPLACED

Are you studying at an Australian university and looking for funding opportunities for your research project? The Conservation and Wildlife Research Trust is offering a limited number of  research grants up to $5000 per year to help Australian END_OF_DOCUMENT_TOKEN_TO_BE_REPLACED

Are you studying at an Australian university and looking for funding opportunities for your research project? The Conservation and Wildlife Research Trust is offering a limited number of  research grants up to $5000 per year to help Australian END_OF_DOCUMENT_TOKEN_TO_BE_REPLACED