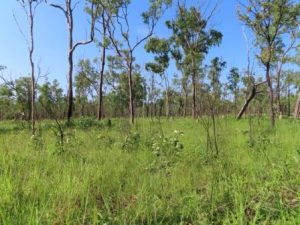 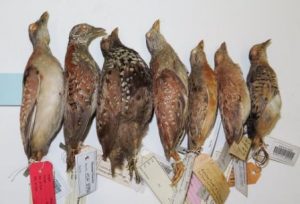 Patrick Webster, a PhD student at the University of Queensland has been provided a grant to assist in his PhD project looking at the ecology of Australia’s least known bird the Buff-breasted Button Quail

The Buff-breasted Button-quail (Turnix olivii) is arguably the most poorly known of all Australian birds (Curtis et al. 2012). Currently listed as Endangered under the EPBC Act, with a population estimate of as few as 500 birds (Garnett et al. 2011), the species has never been the focus of ecological research. The bird’s (potential) extreme rarity means almost nothing is known of its basic biology, such as habitat use, breeding and diet, population trends or threats. Despite its status, there are no formal conservation actions underway to secure the species, due largely to these fundamental knowledge gaps. This project aims to address this issue by addressing the deficiencies in ecological knowledge that impede effective, evidence-based conservation of the species. Initially, a method of detecting and surveying the species will be determined, permitting assessment of habitat requirements, distribution and status at the landscape scale. At the site scale, the project will aim to understand habitat use, seasonal movements, breeding biology and resource use. Understanding the basic ecology, distribution and status of the species at both the site and landscape scales will enable an assessment of its overall status, identifying the threatening processes that are leading to its rarity, and required conservation actions. This research project will contribute to the overarching objectives of the Conservation and Wildlife Research Trust to preserve our wildlife and natural environment by; collecting data that will contribute to a significant improvement in the conservation outlook of the Buff-breasted Button Quail; understanding the true status of the species; and, providing evidence to permit the effective conservation of this poorly-known and endangered Queensland endemic.

All records of T. olivii will be investigated from regional experts, Wildnet database, ebird and other databases. Where possible observers will be interviewed to collect additional data and determine accuracy. Collated data will be used to analyse any trends in observations, seasonality and distribution.

2). Developing a method for detecting and surveying T. olivii

Initially a number of methods will be trialed to determine the most reliable methods of detecting the species this will be performed at locations where the species has been recorded (Mt Mulligan, Brooklyn, Lake Mitchell). Once determined this method will be used to survey for T. olivii further afield across its distribution and to determine any trends in the detected populations. The methods that will be trialed include flushing on foot, call playback, camera trapping acoustic recording, and thermal imaging.

Data obtained from component 1, historic and current records and component 3, GPS and VHF tracking will be used. A predictive model will be created combing habitat requirements, past records and topography. The model and habitat mapping will be tested by using the determined detection method. This will ultimately result in a more accurate understanding of the species distribution and its conservation status.

Button-quail nests are most reliably located by searching the immediate area from which a male has been flushed. Basic breeding biology will be observed and recorded including clutch size, nest construction and location, incubation, fledging and potential threats. The extreme shyness demonstrated by this species particularly at nests will be a major impediment. Specially designed video cameras will be used to overcome wariness of the species and to prevent any disturbance or attraction of predators.

5). Habitat use and seasonal movements of T. olivii using radio telemetry and GPS

T. olivii will be caught using either mist netting, bow nets or walk in trapping using call playback. Individuals will be fitted with either a GPS GLONASS transmitter or VHF transmitter. The GPS GLONASS transmitter will be programmed to provide fixes throughout the year to determine any seasonal movements. The birds fitted with VHF transmitters will be tracked intensively to determine home range sizes and habitat use within and post breeding. This component will require the assistance from volunteers.

Are you studying at an Australian university and looking for funding opportunities for your research project? The Conservation and Wildlife Research Trust is offering a limited number of  research grants up to $5000 per year to help Australian END_OF_DOCUMENT_TOKEN_TO_BE_REPLACED

Are you studying at an Australian university and looking for funding opportunities for your research project? The Conservation and Wildlife Research Trust is offering a limited number of  research grants up to $5000 per year to help Australian END_OF_DOCUMENT_TOKEN_TO_BE_REPLACED

Are you studying at an Australian university and looking for funding opportunities for your research project? The Conservation and Wildlife Research Trust is offering a limited number of  research grants up to $5000 per year to help Australian END_OF_DOCUMENT_TOKEN_TO_BE_REPLACED