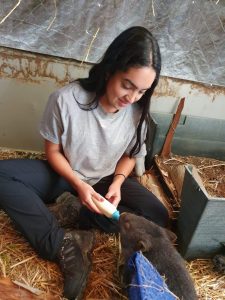 Zoe Imisides, a Master’s student at the University of Wollongong has been provided a grant to assist in her Master’s project involving the bare-nosed wombat. The grant will be used to explore the general ecology, health and behaviour of mange-affected bare-nosed wombats (Vombatus ursinus) pre and post miticide treatment.

Sarcoptic mange is an infectious disease that affects mammals globally. Sarcoptic mange has been reported in several native Australian fauna such as koalas, possums, wallabies and bandicoots. However, the most prevalent and severe cases have been associated with wombat species. Studies have shown that of the three species of wombats in Australia, the bare-nosed wombat (Vombatus ursinus) appears to be more vulnerable to mange, experiencing more severe symptoms and higher mortality rates (Martin et al. 2019). There has also been localised extinction in isolated populations (Fraser et al. 2016). Sarcoptic mange is caused by Sarcoptes scabiei, an astigmatid ectoparasite. The mite burrows into the epidermal and dermal layers of the skin, feeding on skin cells. Infestation causes irritation, inflammation, lesions, thickening and crusting of the skin (parakeratosis), and alopecia typically associated with secondary infections which leads to death (Fraser et al. 2016; Simpson et al. 2016; Martin et al. 2019). Wombats have no natural defence against mange and therefore must be treated with a miticide to survive. However, there is much debate about the chemical, dose and delivery method of miticide treatment in mange-affected wombats (Old et al. 2017).

Sarcoptic mange causes both behavioural and physiological changes in wombats (Simpson et al. 2016; Martin et al. 2019). Multiple studies have observed mange-affected wombats engaging in increased diurnal activity, increased travelling distance and a reduction in perception and light recognition (Simpson et al. 2016). This change in their behaviour may directly favour mange transmission, and thus impact negatively upon the health and long-term survival of individual wombats and local populations. Though, numerous studies have focused on the behavioural and physiological effects sarcoptic mange has on wombats, fewer studies have investigated the changes of mange-affected wombat when treated with a miticide.

The aims of this project are to investigate the general ecology, health and behaviour of mange-effected wombats before, during and after miticide treatment. The project will be undertaken in the Southern Highlands, near Bundanoon, New South Wales, an identified mange hot spot. Wombat Care Bundanoon, a not-for-profit organisation that is licensed to care for and treat mange in wombats, will be involved in the project as part of a community partnership.

In this project the health (i.e. body condition) and behaviour (ie. 24 hr activity patterns) of mange-affected wombats before and after miticide treatment will be investigated using, basic mark-recapture of individual wombats, spotlighting, infrared camera imaging, and thermography. The observations made will be used to assess the basic ecology of wombats’ overtime under differing miticide treatments. The data generated in this project can be used by wombat carers, wildlife veterinarians and natural resource managers when deciding upon the miticide treatments options for wombats. An understanding of how mange-affected wombats change in health and behaviour will assist in their improved conservation outcomes for the species (Old et al. 2017).

Up to 30 wombats will be monitored within a 12 month period. Two treatments will be investigated: 1) healthy wombats (no mange) will be compared; to 2) mange-affected wombats. Within the mangeaffected individuals two different miticide treatments will be used; bravecto and cydectin (n=10, healthy; n=10 treated with bravecto; n=10 treated with cydectin). Miticide treatment of the mange affected wombats will be administered by veterinarians and trained wombat carers affiliated with Wombat Care Bundanoon. Wombats will be marked using a  livestock spray marker to individually distinguish the treatment groups. This non-toxic oil-based spray marker will be applied to an area of their body where fur is present (lateral, backend), and is easy for the observer to see a marked individual using camera traps, spotlighting or by eye only. Animal ethics for this project was approved on the 8th of March 2021.

Behavioural and physiological observations. Individuals will be monitored for measures of basic health using spotlighting, camera trapping and thermal imaging (thermal signature). Indicators of basic health that will be measured/recorded include: 1) estimated % of fur loss; 2) estimated size (length and weight); 3) body condition, 0–5 score. A score of ‘1’ = very poor condition, with the pelvis, shoulder girdle and vertebrae protruding, dull coat. A score of 5 = excellent condition, bones well covered with muscle, and a shiny coat (as per Ruykys et al. 2009).

Data statistical analysis. Generalised linear models (ANOVA and linear regression) will be used to examine the effect miticide (bravecto vs cydectin) has on basic wombat health (metrics listed above) over time since treatment with a miticide. Standard activity pattern analysis will be used to examine behaviour over time since treatment with miticide, using camera trap and spotlighting data (Di Bitetti et al. 2006).

Are you studying at an Australian university and looking for funding opportunities for your research project? The Conservation and Wildlife Research Trust is offering a limited number of  research grants up to $5000 per year to help Australian END_OF_DOCUMENT_TOKEN_TO_BE_REPLACED

Are you studying at an Australian university and looking for funding opportunities for your research project? The Conservation and Wildlife Research Trust is offering a limited number of  research grants up to $5000 per year to help Australian END_OF_DOCUMENT_TOKEN_TO_BE_REPLACED

Are you studying at an Australian university and looking for funding opportunities for your research project? The Conservation and Wildlife Research Trust is offering a limited number of  research grants up to $5000 per year to help Australian END_OF_DOCUMENT_TOKEN_TO_BE_REPLACED